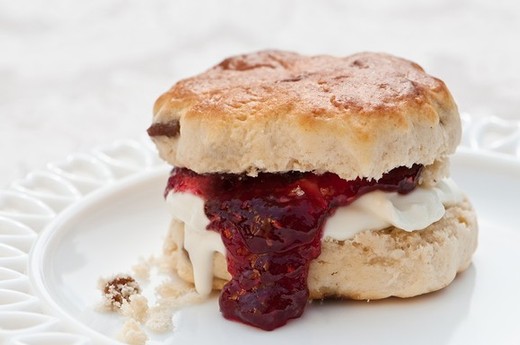 If you are feeling adventurous make your own fruit jam to go with your scones. Just put 2 cups of your choice of fresh or frozen fruit in a sauce pan with ½ cup or a little more of water, ½ cup to ¾ cup of sugar (taste it, it is your choice how sweet), a little squeeze of lemon juice…just drops. Cook this on top of the stove on medium heat until the fruit is thick like jam. Stir occasionally. Check on it so the jam does not burn. Maybe ½ to 1 hour. Remove from the heat, cool slightly, put into a jam jar and serve with your warm scones and tea.

I did not follow Jamie’s recipe directly. My changes are in Red. I did follow the measurements however so they would rise properly, I just wanted different flavors. Lemon and Orange.

“Scones are wonderfully British, delicious, and so simple even a five-year old could make them. There is a magic hour just after they come out of the oven when they are so heavenly, I just can’t imagine why anyone would prefer store-bought scones. Just remember that the less you touch the dough, the shorter and crumblier your scones will be. Get baking.” - Jamie Oliver

First and foremost, brilliant scones are about having the confidence to do as little as possible, so do what I say and they will be really great; and the second and third time you make them you will get the dough into a solid mass even quicker and even better.

Be sure you use organic citrus and wash the fruit before zesting.

Optional: Jersey clotted cream, good quality jam or lemon curd to serve. This is classic however I just don’t think they need the extra butter.

Tip: If you don’t want to bake a whole batch, freeze the scones after you have cut them out. That way another day you can just pop the little frozen scones into the oven and cook as above – just lite golden and lovely. ***Freeze them on a baking tray, once frozen you may place them in a plastic bag they won’t stick together and remove them individually when needed. Freeze them in a single layer in the plastic bag or separate the layers with plastic wrap or wax paper for multiple layers.